The Japanese Skill Copied by the World

Mindfulness has become trendy around the world in recent years – but in Japan, it’s been ingrained into the culture for centuries.

Mindfulness has become trendy around the world in recent years – but in Japan, it’s been ingrained into the culture for centuries.

Even moss is appreciated by the mindful Japanese. Credit: Andrew Whitehead/Alamy.

As the sleek shinkansen bullet train glided noiselessly into the station, I watched a strange ritual begin. During the brief stop, the conductor in the last carriage began talking to himself. He proceeded to perform a series of tasks, commenting aloud on each one and vigorously gesticulating at various bits of the train all the while.

So what was he up to? You could say he’s practicing mindfulness. The Japanese call it shisa kanko (literally ‘checking and calling’), an error-prevention drill that railway employees here have been using for more than 100 years. Conductors point at the things they need to check and then name them out loud as they do them, a dialogue with themselves to ensure nothing gets overlooked. 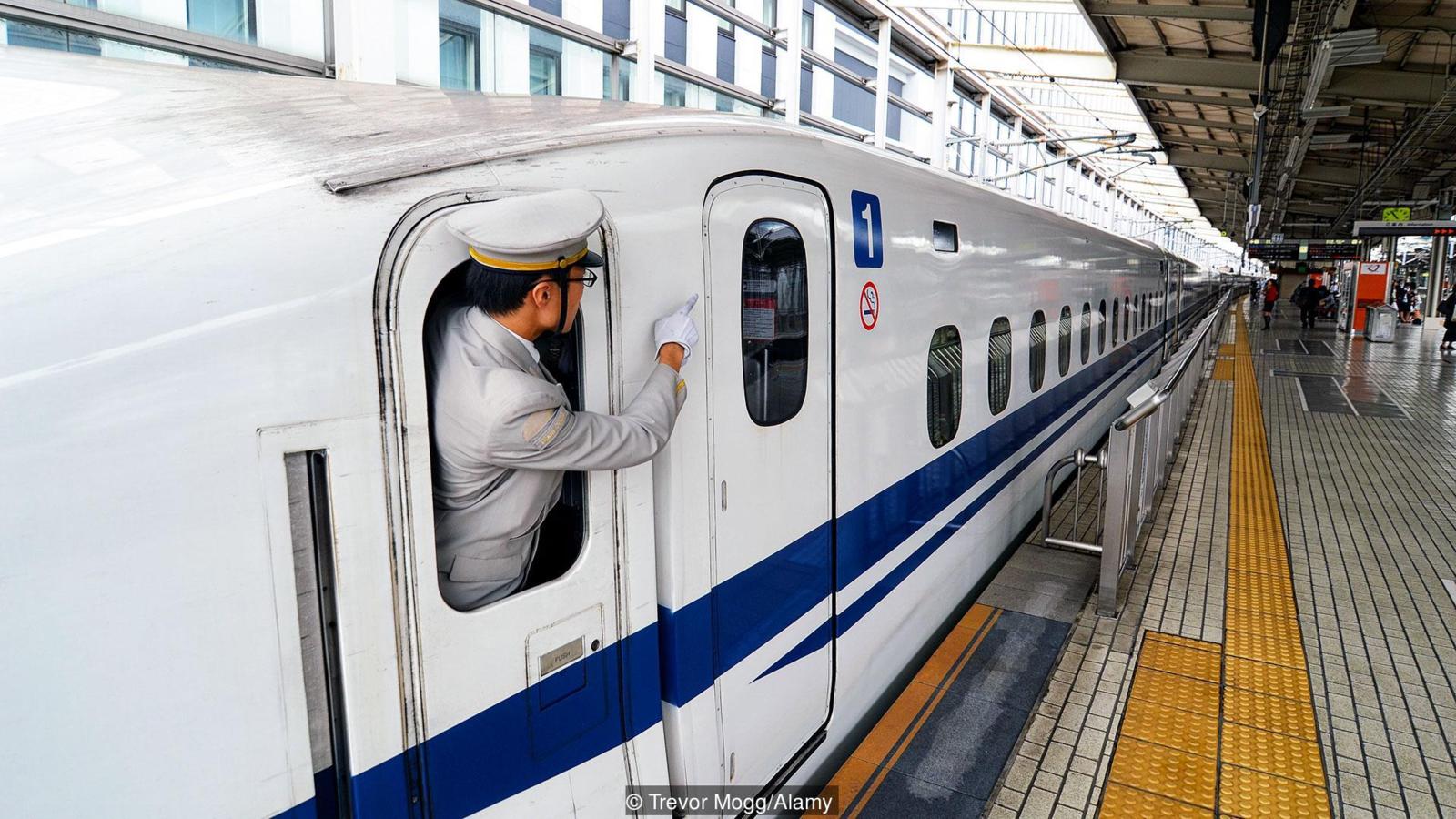 Japanese train conductors practice shisa kanko, pointing at what they need to check and then naming it out loud. Credit: Trevor Mogg/Alamy.

And it seems to work. A 1994 study by Japan’s Railway Technical Research Institute, cited in The Japan Times, showed that when asked to perform a simple task workers typically make 2.38 mistakes per 100 actions. When using shisa kanko, this number reduced to just 0.38 – a massive 85 percent drop.


This may seem a long way from mindfulness, which in recent years has become synonymous with what the Japanese call zazen – meditating cross-legged on a cushion. But according to Jon Kabat-Zinn, Professor of Medicine emeritus at the University of Massachusetts Medical School, where he founded its renowned Mindfulness-Based Stress Reduction Clinic in 1979, mindfulness is “not really about sitting in the full lotus… pretending you’re a statue in the British Museum. Simply put, mindfulness is moment-to-moment awareness.”

And this present-moment awareness has been deeply ingrained into the Japanese psyche for centuries. You don’t hear people talk about it, but it manifests itself in myriad ways. 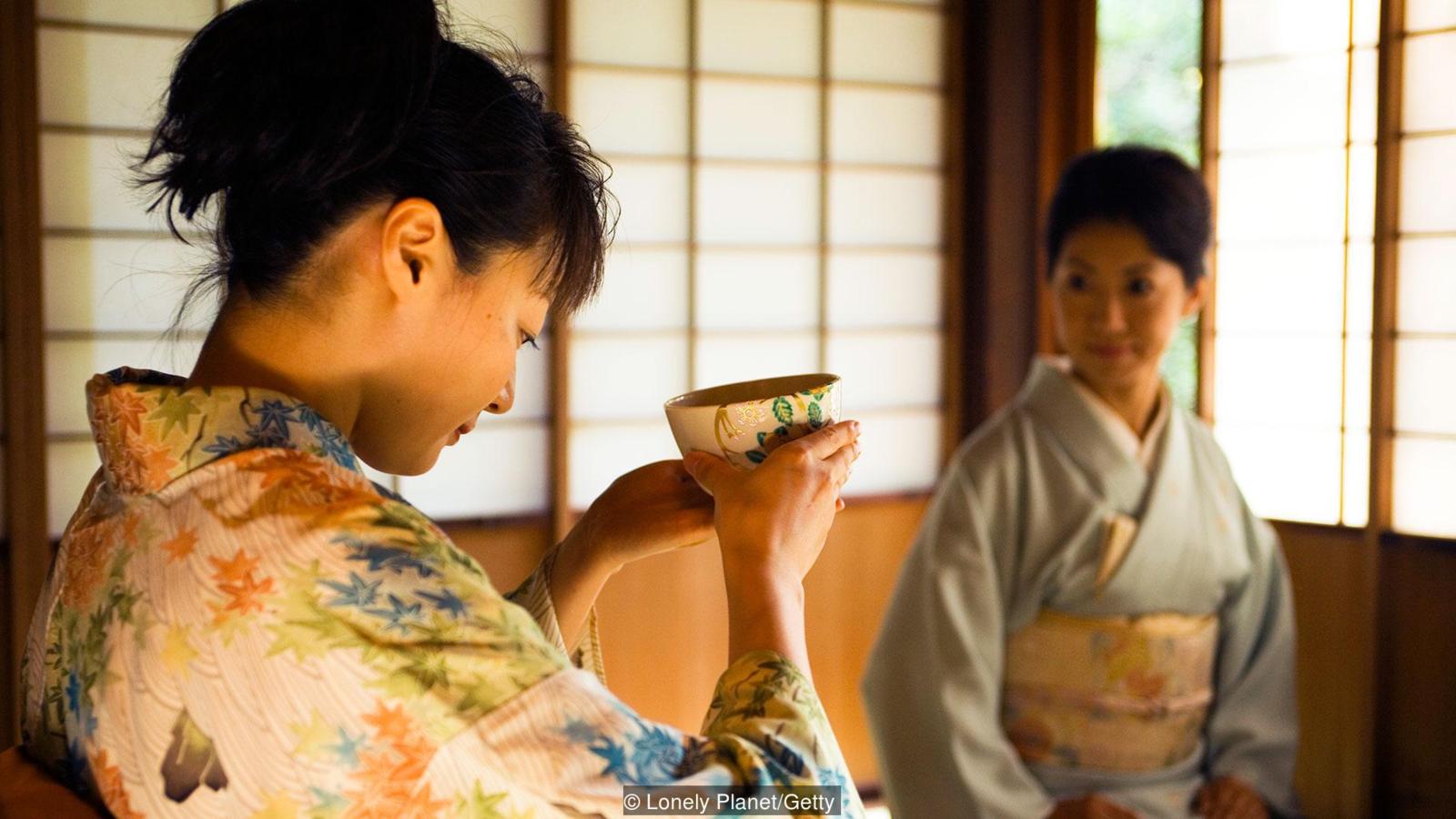 In tea ceremony, participants take time to notice the design of the cup. Credit: Lonely Planet/Getty.

Tea ceremony, haiku and cherry-blossom viewing, for instance, all share a heightened appreciation of the moment. In tea ceremony, participants take time to notice the design of the cup before drinking and appreciate the decoration of the tea room, which reflects the foliage and blooms of the month. But beyond that, the ceremony celebrates the fact that this moment with this person in this place will never happen again.


This moment with this person in this place will never happen again.


Haiku poetry, a Japanese literary tradition dating back to the 17th Century, elevated this celebration of the present moment to a world-renowned art form. Haiku poets attempt to capture the moment’s essence in just 17 syllables, using evocative images from nature to convey a Zen-like sense of sudden enlightenment. The most famous one is Matsuo Basho’s frog haiku, which translated from Japanese reads:

An old pond
a frog jumps
the sound of water

And nowhere is this celebration of the moment more evident than in cherry-blossom viewing, which sweeps the nation like a fever every spring. Why such excitement? Precisely because the blossoms are so fleeting, lasting only a week or so. “Transience forms the Japanese sense of beauty,” said Zen priest and garden designer Shunmyo Masuno.

Transience is celebrated in dozens of lesser-known practices too, such as moon viewing. You can’t help but admire a country that sets aside a special evening in September for contemplating the full moon. Or that holds lavish festivals to give thanks for the work done by inanimate objects, including everything from old kitchen knives to calligraphy brushes and even used sewing needles.


And there are the growing ranks of Moss Girls. Inspired in part by Hisako Fujii’s best-selling book, Mosses, My Dear Friends, moss-viewing has become increasingly trendy, especially with young women, who go on guided tours to Japan’s lush moss-carpeted forests. This goes way beyond just stopping to smell the roses: Moss Girls get down on hands and knees with a loupe to contemplate the lovely growths. 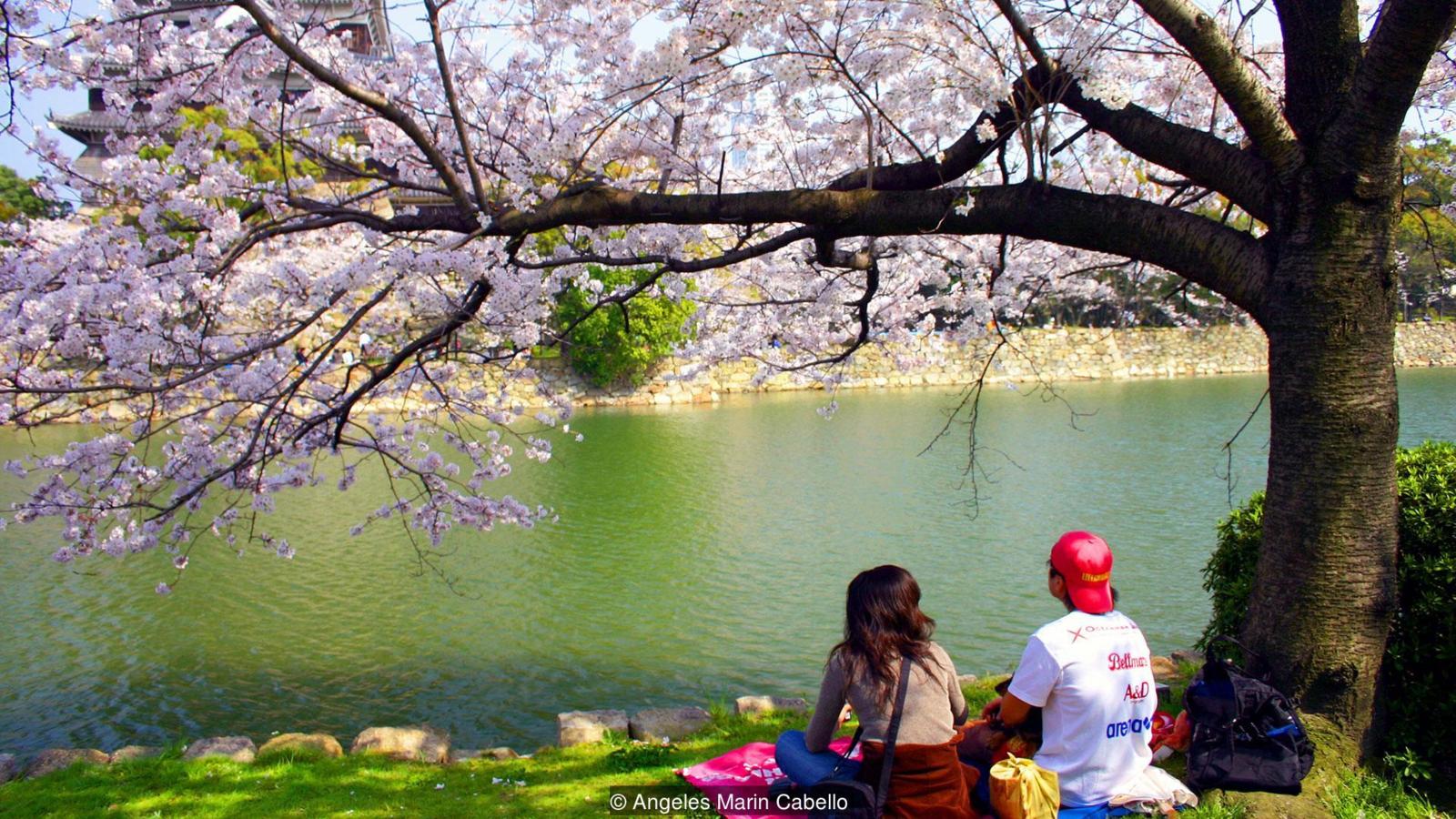 Nowhere is this celebration of the moment more evident than in cherry-blossom viewing. Credit: Angeles Marin Cabello.

And while to the less mindful among us moss may seem insignificantly small, no Zen garden is complete without its moss-covered rock or stone lanterns. It’s the living embodiment of wabi-sabi – the spirit of humble, rustic impermanence that defines Japanese aesthetics.

But there’s more to Japanese mindfulness than gazing at bugs and blooms. Countless practical applications govern virtually every aspect of daily life, all designed to help you ‘be in the now’. At school, days begin and end with a short ceremony, where greetings are exchanged and the day’s events are announced. Before and after each class, students and teacher stand, bow and thank each other. And before starting the lesson, students are asked to close their eyes to focus their concentration.

Similarly, construction workers engage in collective stretches to limber up for the day’s work. In the office, a colleague will tell you 'Otsukaresama', (literally ‘you’re tired’), as a way of saying thanks for the work you’ve done. At meetings, hand someone your meishi (business card) and they'll examine it carefully and make a comment, never dreaming of just sticking it in their pocket.

These practices are a way of what Kabat-Zinn calls ‘purposefully paying attention to things we ordinarily never give a moment’s thought to’. They help keep you conscious of where you are and what you are doing throughout the day, rather than stumbling from one hour to the next on autopilot, focused only on going-home time. 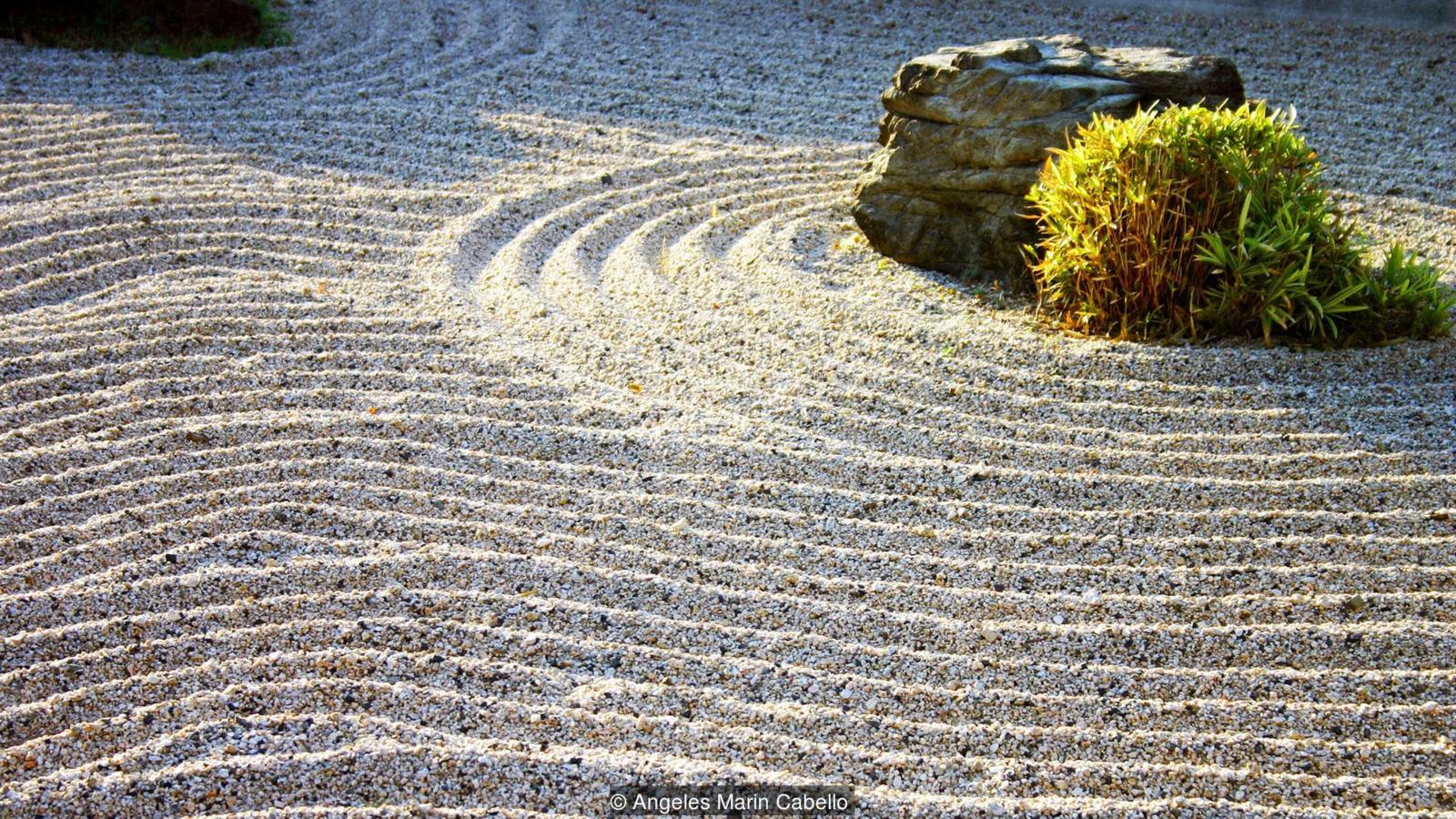 Like so much of Japanese culture, the roots of all these customs lie in Zen. “Mindfulness has been part of the Buddhist tradition for centuries,” said Takafumi Kawakami, priest at Kyoto’s Shunko-in temple. In the Kamakura Era (1185-1333), Zen became popular among the samurai class and had a formative influence on the arts, including tea ceremony, flower-arranging and landscape gardening. In the Edo Era (1603-1868), a time of peace, Zen found its way into the education of common people.

For its practitioners, Zen is an attitude that permeates every action: bathing, cooking, cleaning, working. “Every activity and behaviour in daily life is a practice [of Zen],” said Eriko Kuwagaki of Shinshoji Temple in Fukuyama, Hiroshima Prefecture.

A delightful old Zen story, collected in Paul Reps’ 1957 anthology of Zen texts, Zen Flesh, Zen Bones, illustrates this point. After studying to be a Zen teacher for many years, Teno went to visit Nan-in, an old Zen master. It was raining heavily and, as is customary, Teno left his clogs and umbrella in the entrance before entering Nan-in’s house.


Every activity and behaviour in daily life is a practice [of Zen].


After greeting each other, Nan-in asked Teno: “Did you leave your umbrella to the left or right of your clogs?” Unable to answer, Teno realised he was still a long way from attaining Zen, and went away to study for six more years. 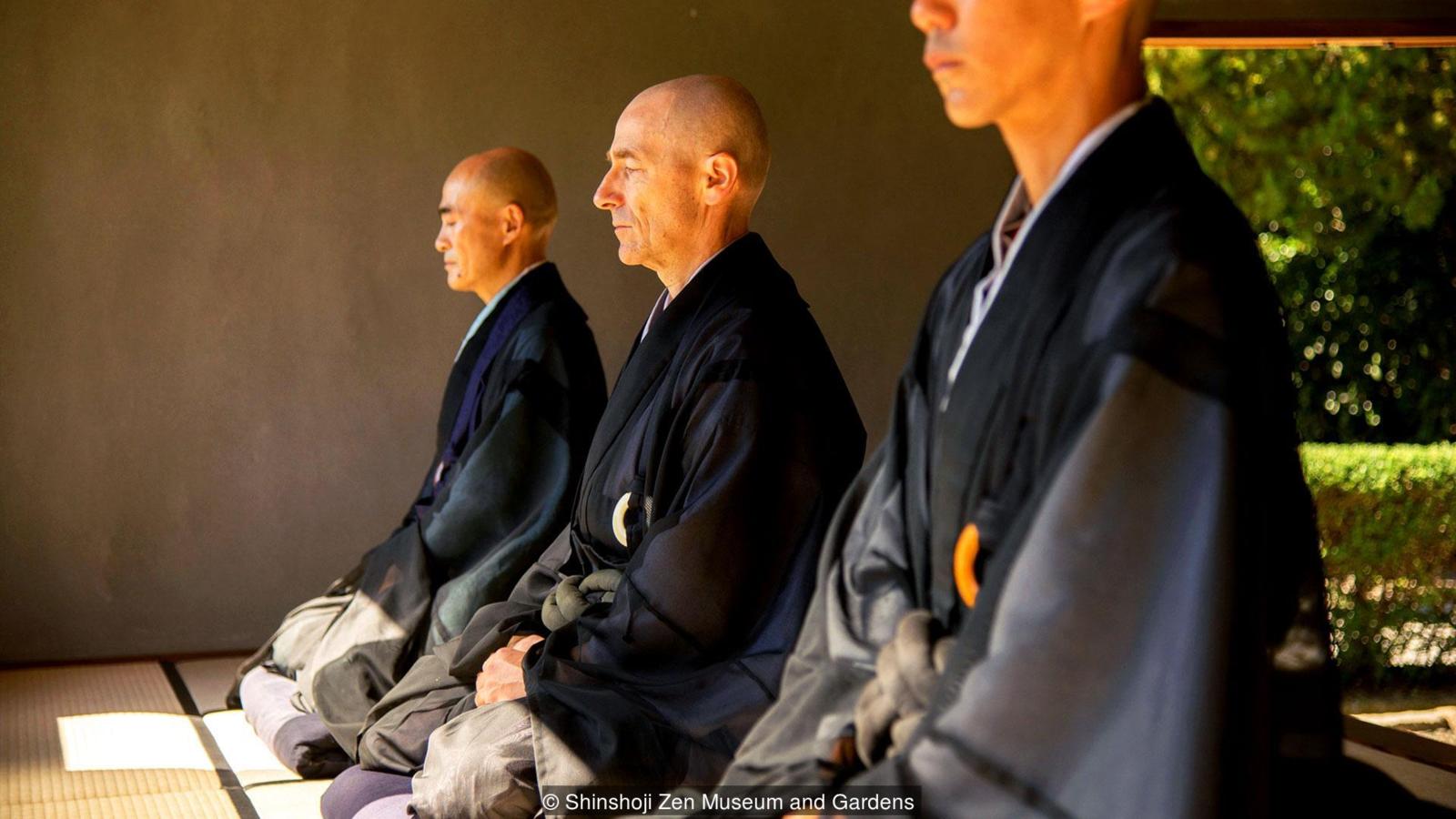 For its practitioners, Zen is an attitude that permeates every action. Credit: Shinshoji Zen Museum and Gardens.

Most of us might not want to take things quite so far. Nevertheless, Nan-in’s question remains relevant, as more and more researchers are discovering that present-moment awareness not only boosts stress resilience and well-being, but also lowers levels of anxiety and depression.

Leah Weiss, a senior teacher at Stanford University’s Compassion Cultivation Program, is one of a growing number of experts who advocate ‘mindfulness in action’. This is something to be practiced throughout the day, rather than just for 10 minutes’ meditation. Weiss described it as “becoming mindfully aware of your thoughts, feelings, and surroundings even while you’re engaged in some other activity.”

So how can we put a little more mindfulness into our lives? Start with something simple, like a bit of pointing and calling before you leave home in the morning. Lights off? Check. Windows closed? Check. Money? Check. Phone? Check. You’ll never forget your keys again.

Then maybe you’ll have time to stop and notice the moss.

This article was originally published on May 9, 2017, by BBC Travel, and is republished here with permission.