What Each Side of the COVID-19 Debate Should Understand About the Other - Reason.com

community » Discussions » Topic » Entirely New » Discussion » What Each Side of the COVID-19 Debate Should Understand About the Other - Reason.com

The war between Openers and Closers shouldn't be seen as a fight between idiot death-worshippers and unnecessarily frightened tyrants.

The war between Openers and Closers shouldn't be seen as a fight between idiot death-worshippers and unnecessarily frightened tyrants. 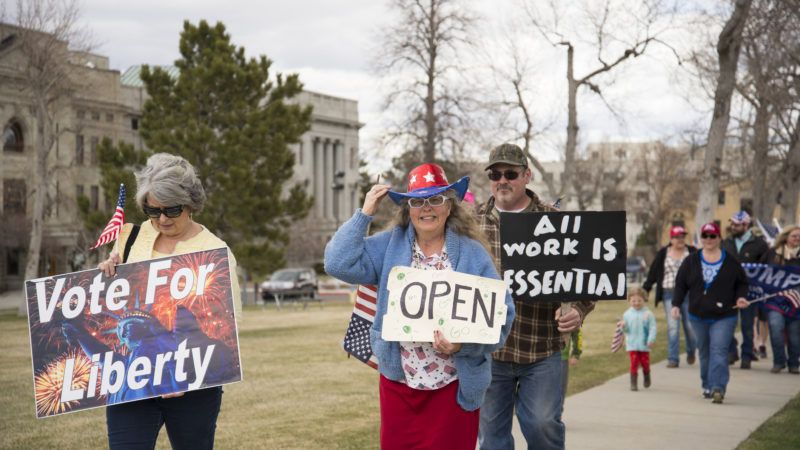 Beyond its devastating effect on the health of hundreds of thousands and the livelihood of millions, the COVID-19 crisis is a harshly vivid example of Americans' inability to understand, fruitfully communicate with, or show a hint of respect for those seen to be on other side of an ideological line.

Americans are divided about the best way to proceed from here, three months since the first case was diagnosed in the U.S. The division is more vivid and harsh on social networks than in the polls, where a vast majority of Americans still think strong lockdowns are the best idea moving forward. Such Americans think the economy needs to stay shut down by law until a vaccine or some effective treatment is developed that ensures no more, or a very tiny number of, people will be seriously harmed or killed by COVID-19.

On the other hand, some Americans think, on balance, the country's overall quality of life demands we start letting people and businesses make their own decisions about whether it is safe to go out in public or conduct business openly, especially given access to simple prophylactic measures such as gloves and masks.

To sum up each side in the language of their angriest opponents: The "Closers" want to demolish nearly all Americans' ability to live, and destroy nearly all the wealth our society has built up over decades, by halting the wheels of most commerce for the forseeable future. And the "Openers" are so dedicated to keeping GDP growing and so ignorant of science they want to see hundreds of thousands, maybe millions, of Americans die of a hideous disease because they don't understand how contagion works.

Both Closers and Openers, though, have a combination of reasons, theories, guesses, and value judgments of a sort many sane people have always made, that make their respective positions make sense to them. Neither side should be blithely written off as either idiotic or sinister or not thinking, in their own way, of human well-being.

The Openers think they see many costs the Closers are not adequately considering, and wonder if the long-term benefits of closing are smaller than the Closers believe.

Openers are worried about over 15 million Americans out of work, and look at industries including hospitality, food service, entertainment not beamed in via smart TVs, sports, construction, oil, education, law, and even, counterintuitively, medical care (not to mention all non-food retail and any financial or other entities who depend on rents and mortgages continuing to be paid in the months to come) all either destroyed or seriously weakened and unable to move forward at anything near their old strength.

They worry that the web of commerce is so complicated and hard to build or to gently snip off portions of that as-yet-unrealized problems will arise with an economy that acts as if making, transporting, and selling food will keep working fine even if nothing else is.

Openers see the government's short-term solution of loans and giveaways both personal and corporate in the trillions and growing as seriously dangerous, with a real possibility of upending our fiscal and monetary systems under debt and/or money supply explosions that could become truly unsustainable and take decades to recover from. They see states and localities facing already near-impossible pension and other obligations and shrinking tax bases pushed closer, faster, to an abyss of complete inability to function, with dire effects on citizens.

Openers think it is worth seriously wondering about many as-yet-unknown facts, such as actual current infection rates, asymptomatic numbers vs. ill numbers, and death rates and age distributions of same. They understand that the Openers vs. Closers debate involves cost/benefit decisions, and they want to understand the benefits as well as possible. Openers do believe that one cannot build public policy as if "saving one life" (or, more accurately, delaying one death) is the sole goal and think it important to note that in no other situation and with no other illness have we acted as if that was a reasonable goal.

Openers do take very seriously the idea of "flattening the curve"—perhaps, an Opener might think, even more seriously than the Closers do, because Openers can't help but think that this virus will, over whatever length of time, infect everyone everywhere until herd immunity is reached or by whatever method R0 becomes less than one.

That is, Openers think it reasonable to consider that we are not facing a choice to "save lives" (or delay deaths) in the sense of preventing infections from ever occurring, which is more or less impossible now. The only really important consideration now is excess deaths or serious illness complications caused by inadequate medical facilities because at some given day in some specific hospital COVID cases are overwhelmingly large.

Openers thus wonder why more public policy decisions aren't being made based on a rigorous calculation of that number, now and in a reasonably foreseeable future based on best understanding of our hospital capacity, how quickly we could increase that capacity if that became public policy priority one, and the prevalence, percentage symptomatic, and percentage brought to brink of death by the disease. Openers tend to believe a "testing" solution or a "vaccine" solution are both outside the realm of plausibility now and for any foreseeable future.

The Closers, meanwhile, are seen by hostile Openers as driven by some sinister desire for a scenario in which the only "reasonable" endgame for living anything like a free life is either or both enforced vaccination and constant registered surveillance, or who for partisan political reasons want to make 2020 so miserable in America that Trump will lose the election.

However, the Closers have many reasons that make sense to them to keep things closed that don't involve a mad desire to tyrannize the country or harm Trump. Closers see and acknowledge the economic damage we are suffering, but they see most of that damage already inherent in the unchecked spread of a disease that kills or seriously harms people to a greater extent than any we've dealt with in a century. They thus don't see the economic problems as solvable just by "opening up America."

Closers see anyone who, aware that COVID-19 exists and can spread asymptomatically, then does anything that could in any way risk someone else catching it as morally akin to murderers. The Closers are very concerned with the fact that people are dying from this disease, in the tens of thousands—that COVID-19 is indeed after just three months by best available data likely killing nearly double as many Americans as were killed by the flu this flu season. Closers thus consider some Openers' niggling obsessions about marginal accuracy in that fatality count as irrelevant to any policy decision we are now facing. Even if those numbers are not 100 percent accurate, they are large enough to make worrying over their precise size peculiarly beside the point.

Closers also recognize that the death count is not the best or most accurate way to assess the threat COVID-19 presents and thus what sacrifices are reasonable or prudent to try to keep it from spreading faster. The disease is known or suspected to be neurotoxic and hepatoxic, not merely a respiratory illness, and might cause serious and possibly long term damage to the heart, blood, liver, and nervous systems of those who contract, it even if they "recover."

Closers are also sure that we can't know how much damage COVID-19 will eventually cause in our nation just based on the experience of the past 6 weeks, when we have been doing our best to keep people from getting close enough to each other in large enough numbers to truly and quickly unleash COVID-19. Thus to the Closers, any calculations based on "existing data" that are supposed to settle the question of whether we've done enough, or even too much, and can now "open up" are beside the point, in a genuinely dangerous way. If it's not an intolerable nightmare yet, they would say, that's because we are staying shut down.

The damage done by the disease and/or the policy reaction to the disease is baked into our nation, and will almost certainly echo strongly through at least the rest of this decade. Our nation might be slightly better off, though, if more of us did not compound that civic damage through a ferocious and unmanageable cultural and political squabble based on refusing to consider the reasons the other side thinks what they do with anything approaching intellectual charity and empathy.

We could, though might not ever, know the answer to every currently unanswered question about the disease's spread, extent, and damage. We might figure out accurately the long term damage to life and prosperity the economic shutdown is causing. Even if or when we do, though, human beings of goodwill and intelligence might come to a different value judgment about what policy is best overall. Because we all have to make those tricky, very hard-to-discuss-dispassionately decisions (of a sort we have always made every day on the margins without explicit debate) about when we think it best to stop shaping policy toward the sole goal of extending every possible life. The answer either side might come to need not be condemned as based in idiotic recklessness or tyrannical fantasies.