Warrant marks a major escalation of the investigation of stock trades by lawmakers as the coronavirus spread. 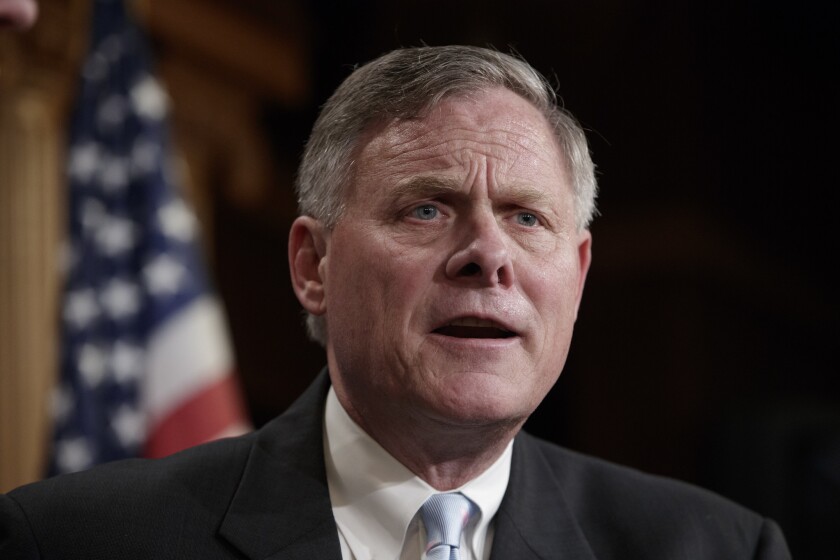 Federal agents seized a cellphone belonging to a prominent Republican senator on Wednesday night as part of the Justice Department's investigation into controversial stock trades he made as the novel coronavirus first struck the U.S., a law enforcement official said.

Sen. Richard Burr of North Carolina, the chairman of the Senate Intelligence Committee, turned over his phone to agents after they served a search warrant on the lawmaker at his residence in the Washington area, the official said, speaking on condition of anonymity to discuss a law enforcement action.

The seizure represents a significant escalation in the investigation into whether Burr violated a law preventing members of Congress from trading on insider information they have gleaned from their official work.

To obtain a search warrant, federal agents and prosecutors must persuade a judge they have probable cause to believe a crime has been committed. The law enforcement official said the Justice Department is examining Burr's communications with his broker.

Such a warrant being served on a sitting U.S. senator would require approval from the highest ranks of the Justice Department and is a step that would not be taken lightly. Kerri Kupec, a Justice Department spokeswoman, declined to comment.

A second law enforcement official said FBI agents served a warrant in recent days on Apple to obtain information from Burr's iCloud account and said agents used data obtained from the California-based company as part of the evidence used to obtain the warrant for the senator's phone.

Burr sold a significant percentage of his stock portfolio in 33 different transactions on Feb. 13, just as his committee was receiving daily coronavirus briefings and a week before the stock market declined sharply. Much of the stock was invested in businesses that in subsequent weeks were hit hard by the plunging market.

Burr and other senators received briefings from U.S. public health officials before the stock sales.

A spokesperson for the FBI did not return phone messages seeking comment. A spokeswoman for Burr declined to comment. Burr has said he does not plan to run for reelection in 2022.

Burr's sell-off — which was publicly disclosed in ranges — amounted to between $628,000 and $1.72 million. The stock trades were first reported by the Center for Responsive Politics and ProPublica.

After the sales became public, Burr said that he would ask the Senate Ethics Committee to review them.

Burr is not the only senator who has come under fire for dumping stock as the virus neared the United States.

In late February and early March, Sen. Kelly Loeffler (R-Ga.) sold stocks valued at between $1.25 million and $3.1 million in companies that later dropped significantly, including ExxonMobil. She also bought shares in Citrix, which makes telework software.

Loeffler, who was appointed to her seat to fill a vacancy and faces an election later this year, said after the sales became public that she and her husband would divest all individual stocks.

Burr, a longtime supporter of federal programs responsible for dealing with a pandemic, sits on two Senate committees that got early briefings on the coronavirus — the Intelligence Committee and the Senate committee that handles health issues.

The health committee received a briefing on the virus on Feb. 12, one day before his stock trades.

The same day Burr sold his stocks, Burr's brother-in-law, Gerald Fauth, sold between $97,000 and $280,000 worth of six stocks, according to documents filed with the Office of Government Ethics. Fauth serves on the National Mediation Board, which provides mediation for labor disputes in the aviation and rail industries.

Burr has denied coordinating trading with his brother-in-law.

In 2012, Congress prohibited lawmakers from acting on intelligence they learn because of their privileged position, such as briefings with high-level federal officials.

Under the STOCK Act, lawmakers are required to disclose their stock market activity but are still allowed to own stock, even in industries they might oversee.

The law passed the Senate in 2012 in a 96-3 vote. Among the three senators to oppose the bill was Burr.